The SOCOTEC Group has taken its deployment of BIM to a new level by delivering its first BIM Model – As Built certification to Nexity for its model of the Le Lauréat student accommodation building in Villejuif, near Paris. The BIM model was developed by SXD, a subsidiary of Engie-Axima. The SOCOTEC certification guarantees that the model is in compliance with the built structure.

Guaranteeing compliance with the BIM model and the completed structure

This certification allows the project manager, when handing over a structure, to supply certification from an independent organisation that attests that the BIM Model is in complete compliance with the built structure.

BIM Model – As Built certification is based on a very detailed set of guidelines drawn up by SOCOTEC Certification France in collaboration with the BIM experts in the SOCOTEC Group and BIM in Motion, SOCOTEC’s startup partner. The certification process involves several phases based on audits that take place at different key stages of the project:
- Audit of the BIM Management system
- Audits of the structure and the model content, i.e. the arborescence, and the quality and completeness and the data as compared to the guidelines
- Checks, via onsite audits, that the BIM model matches the built structure, using augmented reality technology

The building certified is the Le Lauréat student accommodation block in Villejuif, near Paris, which includes 68 apartments for a total surface of 1,557 square metres. Handed over in September 2017, it is built of cross-laminated timber (CLT). The project manager is Nexity, on behalf of Nexity Studéa. The certification has been delivered after construction, based on post-handover audits. 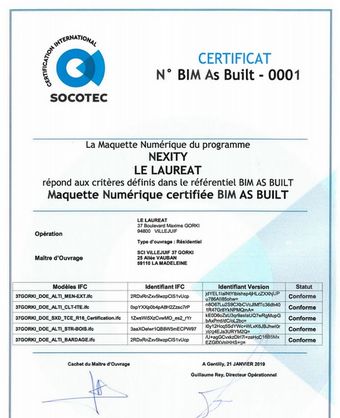