Redevelopment of Weser-Lutter halfway through

For nearly a year, the piping of the 120 year old Weser-Lutter channel is restored in the downtown area of the city of Bielefeld. Until now, about 300 meters of an approximately in total 700 m long section was redeveloped with large reinforced concrete box sections. Earlier, two parallel waste water collectors have been successfully renewed over a length of about 400 m. An important traffic road, the "August-Bebel-Straße" could be crossed according to the schedule in the end of 2015. For that an disruption of the existing rail tracks was required with an extremely tight time frame.

The planing and construction supervision of the 1st phase of construction is done on behalf of the Umweltbetrieb Stadt Bielefeld (environmental agency of the City Bielefeld), carried out by ZPP.

An impression of the ordered and well structured building process can be done directly on site. The video filmed by a quadcopter made by the construction company Klaus Stewering GmbH, Borken gives a good overview on the street of houses. 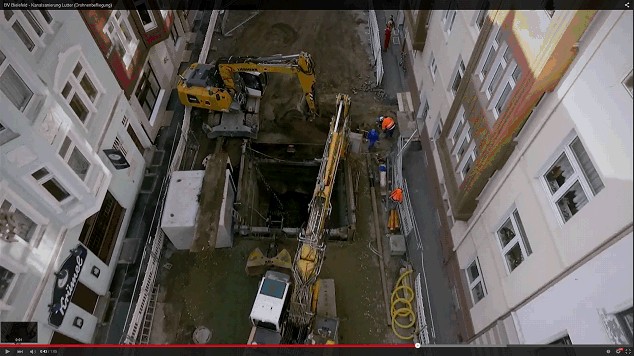