"Halfway there" at the Emscher sewer canal

In the beginning of June, at the intermediate shaft in Oberhausen-Eisenheim, a bit more than half of the complete 10 kilometres long canal double tube of the construction segment 40 was developed. Already to date, 9.600 rings, consisting of 57.600 tubbing stones, were applied in the two tubes of the segment, developed via tubbing expansion.

ZPP has been accompanying the project since the planning stage, while being in charge of operating, in cooperation with ZMM monitoring, the self-developed online monitoring of drift, tubbing expansion and surface settlement from the start of the drift. Over 270 measured values that are reported every 10 seconds by both drifts have meanwhile summarised itself to over 2.3 billion measured values. Together with more than 23.000 surface measurements and 2.250 condition captures of the tubbing expansion, not only is a always current and steadily available condition figure possible during the construction time, but it also enables a targeted inspection and redevelopment planning during the subsequential operating time. 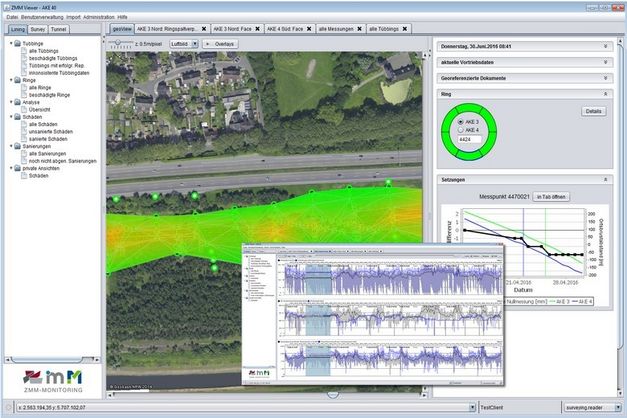