Ground breaking ceremony for the Hunnebecke

Start of construction for the culvert blow-up in Münster

On the 6th of June 2019, after the successful awarding of the measure, the ground breaking ceremony for the culvert blow-up of the Hunnebecke took place, to which residents, politicians and administration, as well as the planners of the measure were invited to a ceremony.

The Hunnebecke is a small creek that runs in an open pit through the Münster Nienberge district before it crosses the embankment of the main road 54 in culvert.

On the 28th of July 2014, an extreme heavy rainfall event occurred in Münster. The Hunnbecke, which absorbs and drains the rainwater from Nienberge, discharged such large quantities of water that it could no longer be handled by the existing culvert. There was a flood of large parts of the residential area, which led to high material damage to buildings, household goods and vehicles.

After this event, the City of Münster enlarged the culvert. ZPP was commissioned with consulting on various buildings for the crossing of the B54 and subsequently with the planning of the renewal measure. The enlargement of the culvert is intended to increase the hydraulic capacity – and thus the safety against flooding – as well as to improve the ecological consistency of the watercourse.

We wish the City of Münster as well as the commissioned construction company Johann Bunte a lot of success in implementing the measure! 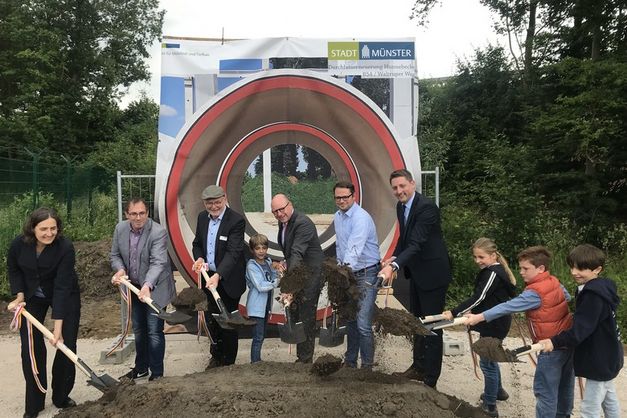