Within the scope of the termination of coal production in Germany at the end of 2018, the RAG Aktiengesellschaft reshapes its pit dewatering in the Ruhr Area towards well dewatering. Thus, on all dewatering locations, the pump facilities installed underground will be disassembled and the open shafts of the former mines will be backfilled with concrete. Thereby, aside from the climbing formwork technology, the proven clad pipe technology will be utilised mainly.

The explosion protection for the on-site team plays an important role during the backfilling works in the shaft, due to the possibility of mine gases, which are naturally leaking from the hard coal-leading stone layers, concentrating themselves into an explosive mixture. In order to keep these mixtures away from the actual construction site in the shaft, it is vital to close up the open clad pipe at the lowest end both gas-proof and explosion-proof.

ZPP, in close cooperation with RAG, further developed the existing pipe clad fastener system with the set goal to significantly reduce the dead weight under retention of the robustness and the opening principle over a water load. The majority of the inspections is finished. The explosion-proof clade pipe fastener is now awaiting its approval by the district government. 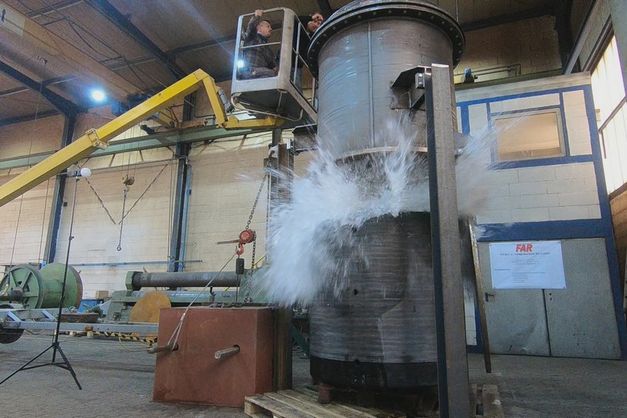